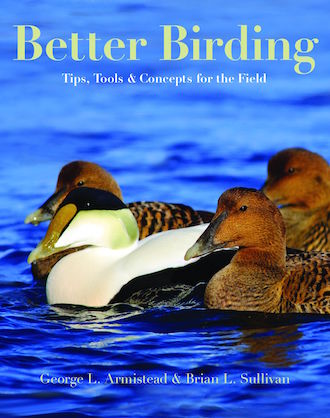 “Identification,” write George L. Armistead and Brian L. Sullivan in this serious, immensely informative book, “is very much about identity, but too often our study of a species ends with the acquisition of a single signature field mark.”

A bird’s appearance is only a part of its identity, they contend. A birder gains expertise when he or she looks at the bird as a whole. And the whole, they argue, includes not just a bird’s plumage, shape, behavior, and flight style, but also its habitat, seasonal habits, range, and natural history. “Truly expert birders,” they conclude, “know not only what the bird is, but why the bird is.”

These are authors who know why birds are. Armistead, the author of ABA Field Guide to Birds of Pennsylvania (Scott & Nix, Inc., 2015), has guided birding trips on all seven continents and worked in the Ornithology Department of the Academy of Natural Sciences, in Philadelphia. Sullivan, an eBird project leader and the photographic editor for Birds of North America Online, is a coauthor of The Crossley ID Guide: Raptors (Princeton, 2013) and, with seabird expert Steve N. G. Howell, of Offshore Sea Life ID Guide: East Coast and Offshore Sea Life ID Guide: West Coast (Princeton University Press, 2015).

You get the impression that the two could have written at length about every bird recorded in North America, but you won’t read about gulls, Empidonax flycatchers, hummingbirds, Catharus thrushes, or wood-warblers here. This is not a guide to all of North America’s birds, and it isn’t a guide to hard-to-ID species, either, although a few often-confused species are covered.

“Our primary goal for this book is to help you develop a solid foundation for building your field skills. We will hit on the typical field marks but will also steer you toward behavioral cues and hints on habitat, which, combined with the natural history and taxonomic notes, will provide a broader way in which to view birds.”

Armistead and Sullivan describe 24 groups of birds, which they address in nine chapters:

Waterbirds: Covering the five loons in the genus Gavia; the three swans in Cygnus, along with Whooper and Bewick’s; Mallard and American Black, Mottled, Mexican Ducks; and Snowy, Great, Cattle, and Reddish Egrets and Little Blue and “Great White” Herons.

Coastal birds: North America’s four eiders, including the Alaskan specialties Spectacled and Steller’s; Marbled, Kittlitz’s, and Long-billed Murrelets (but not Scripp’s, Guadalupe, Craveri’s, or Ancient); and the Pacific cormorants, including Double-crested and Neotropic.

Seabirds: Northern Gannet and our four boobies; Sooty and Bridled Terns and Brown and Black Noddies; and the Atlantic gadflies — Black-capped, Bermuda, Fea’s, and Trindade Petrels (characterized here as the “Ferraris of the bird world”).

Large shorebirds: The three curlews in the genus Numenius and four godwits in Limosa.

Skulkers: Le Conte’s, Nelson’s, Saltmarsh, and Seaside Sparrows (but not Grasshopper, Baird’s, or Henslow’s, the other sparrows in the genus Ammodramus) and wetland wrens.

Night birds: The three screech-owls in the genus Megascops and Flammulated Owl, and the three Chordeiles nighthawks.

Open-country birds: Yellow-bellied kingbirds in the genus Tyrannus; the crows and ravens in the genus Corvus; American, Sprague’s, and Red-throated Pipits; Lapland, Smith’s, Chestnut-collared, and McCown’s Longspurs; and the three species in the genus Molothrus (cowbirds).

Well-chosen photos illustrate each chapter, and excellently rendered Crossley-style composite photos allow readers to compare not only the species in each group but also adults and juveniles, males and females, and breeding and nonbreeding plumages.

As a result, the book is like an expertly guided tour — one that visits wetlands, open country, waterways, forests, shores, and other habitats from Alaska and the Pacific coast to Florida’s Dry Tortugas and the Gulf Stream waters off Cape Hatteras, making clear, along the way, what members of each group have in common and how they differ, and, indeed, why each bird is.