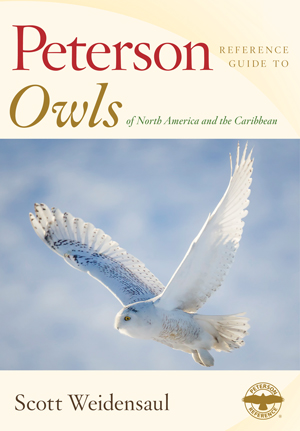 Scott Weidensaul is a talented author who writes about subjects we find fascinating — the history of American birding, a trip across the continent in the footsteps of James Fisher and Roger Tory Peterson, a worldwide search for vanishing species, the sweeping story of bird migration.

He is also a licensed hummingbird bander with a keen interest in western species that stray east each winter and a co-founder of Project SNOWstorm, the ambitious ongoing study of Snowy Owl, another charismatic species with a tendency to wander.

In this book, a welcome addition to the growing Peterson Reference Guide series, he blends his considerable storytelling abilities and wide-ranging research interests to describe what we know, what we’ve just learned, and what we don’t know yet about owls found north of Guatemala.

The 19 species commonly depicted in popular North American field guides are well covered, and many of the accounts dispel misconceptions. Indeed, in our last issue we published an excerpt that explained why Snowy Owl deserves to be called the most recognizable and the most thoroughly misunderstood owl in the world.

We especially enjoyed Weidensaul’s descriptions of the region’s least-known species — Crested Owl, “unforgettable when seen but still largely an enigma to science”; Black-and-white Owl, whose nesting habits are known from just four attempts by two pairs; dark, wraithlike Stygian Owl, whose presence is “often more a case of rumor and conjecture than hard fact”; and Fulvous Owl, “essentially a flying question mark.” These passages can’t help but fire the imagination of armchair as well as traveling birders.

Review of Peterson Reference Guide to Birding by Impression.