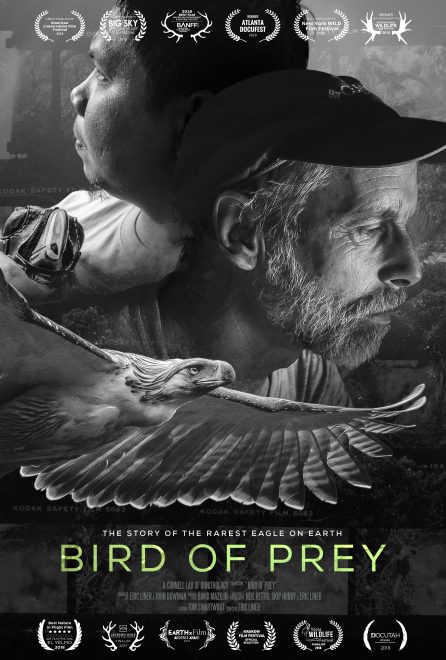 An extraordinary feature-length documentary film about the Philippine Eagle is now available for rent or purchase on iTunes, Amazon, and Vimeo.

Bird of Prey weaves stunning natural history footage of the critically endangered eagle with the remarkable story of wildlife cinematographer Neil Rettig and a small group of conservationists from the Philippine Eagle Foundation (PEF) who work tirelessly to save the bird from extinction. The film follows Rettig’s return to the Philippines 36 years after he and his crew captured the first-ever recorded images of the eagle in the wild. Decades later, at the at age of 64, Neil returns to the Philippine jungle on a grueling expedition to find the reclusive raptor and once again film a pair of eagles as they attempt to raise a newborn chick.

The documentary, from the Cornell Lab of Ornithology, won several awards at film festivals over the last year, including the International Wildlife Film Festival and the NY WILD Film Festival.

Despite punishing heat, cramped camera platforms perched 14 stories above the forest floor, and daily assaults from biting ants and flies, the crew persevered for more than 100 days in the jungle to document the eagles’ story.

“Remarkably, the wild chick was born the first day we were rolling cameras in the forest” says director Eric Liner from the Cornell Lab. “It was incredibly exciting and dramatic, but it also came with the disquieting realization that we couldn’t be sure if the chick would survive.”

Liner and his crew often frame shots close-up, giving the film an immediacy and an intimacy with its subjects that nature documentaries don’t always possess. And Liner skillfully weaves in footage from Rettig’s past effort to film eagles, in the 1980s.

With fewer than 400 breeding pairs left in the wild, the Philippine Eagle is considered the world’s rarest bird of prey and the future survival of the species is in doubt. In addition to large-scale habitat loss from commercial logging in the mid to late 20thcentury, pressure from development, forests converted to agriculture, and human persecution continue to threaten the present-day eagle population.

Bird of Prey is now available for rent ($4.99) or purchase ($12.99) on iTunes, Amazon, and Vimeo. Find links to these platforms and additional information on the film’s website and on Facebook. Sales from the film go directly to supporting the continued conservation efforts of the Cornell Lab of Ornithology.

‘The Messenger’ reveals the struggles of songbirds worldwide