Become a member and get exclusive access to articles, contests and more!
Start Your Free Trial
BirdWatching  •  News & Features  •  Birdwatching  •  ‘The Narrow Edge’ author to speak in Massachusetts

Deborah Cramer, author of The Narrow Edge, the critically acclaimed new book about the Red Knot, will give a lecture and sign books at the Museum of American Bird Art, in Canton, on Saturday afternoon, October 17. 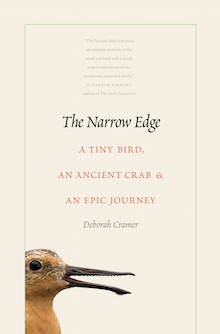 of the book was a highlight of the mid-year roundup of notable books that we published in our June 2015 issue.

Cramer, the author of two previous books and a visiting scholar at MIT, tells a gripping and important tale in The Narrow Edge (Yale University Press, 2015). She describes following the embattled shorebird throughout its vast range, from Tierra del Fuego, in southern South America, along the beaches of Texas, South Carolina, and New Jersey, to arctic nesting areas on Southampton Island, in northern Hudson Bay.

“The list of challenges facing knots is long,” we stated in our review, “but Cramer writes of many people who stand for the birds, people she says can ‘renew the web of life at the edge of the sea.’”

The U.S. Fish and Wildlife Service listed the rufa subspecies of the knot as threatened under the Endangered Species Act in early December 2014.

“The Red Knot is a remarkable and resilient bird known to migrate thousands of miles a year from the Canadian Arctic to the southern tip of South America,” said USFWS director Dan Ashe at the time. “Unfortunately, this hardy shorebird is no match for the widespread effects of emerging challenges like climate change and coastal development, coupled with the historic impacts of horseshoe-crab overharvesting, which have sharply reduced its population in recent decades.”

A feature article in our April 2011 issue made the case for the listing. It described how research conducted in the Arctic by a senior research scientist with Environment Canada showed that the knots pay a considerable survival penalty for failing to find enough to eat in Delaware Bay in spring.

Cramer’s lecture will begin at 3 p.m. Admission is free, and registration is not required. The author will sign books after speaking.

Details about the event, the first of Mass Audubon’s new fall lecture series, are available on the Mass Audubon website.

Article: A scientist in the high Arctic reveals why the Red Knot is a marvel of biological engineering.

Read more reviews of books about birds and birding.