It’s too soon to say what the final impact will be of the devastation wrought by Hurricane Harvey on birds, bird habitats, and conservation groups. But here’s what we know so far. 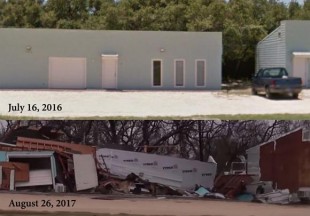 The International Crane Foundation’s field office in Rockport, Texas (right), was destroyed when Harvey stormed ashore in the coastal city this past weekend. ICF staff members were not harmed, and now the foundation is asking for donations to rebuild. Here’s how to help.

Hurricane Harvey’s winds and floods also forced the U.S. Fish and Wildlife Service to close at least 10 national wildlife refuges and three offices. The following refuges and offices will be closed for at least one to two weeks:

In addition, all Houston Audubon sanctuaries and offices are closed until further notice.

The Whooping Cranes that winter in and around the Aransas refuge are still on their breeding grounds in Canada and will begin to arrive in Texas in mid-October. While no official word has been made yet of the storm’s impact on the refuge, the National Wildlife Refuge Association wrote that “catastrophic damage is expected.”

The storm has also raised concerns about the population of Attwater’s Prairie-Chicken, the endangered subspecies of Greater Prairie-Chicken that occurs in the wild at only two locations south and west of Houston: the Attwater Prairie Chicken National Wildlife Refuge near Eagle Lake and on private lands in Goliad County. A Washington Post article reports that Harvey may have “devastated” the prairie-chicken population due to floods and the floating masses of fire ants that feed on the insects the chickens also eat.

The Animal Rehabilitation Keep (ARK) at UT Marine Science Institute, a wildlife rehab facility in Port Aransas, Texas, sustained heavy damage, but all of the birds and turtles in its care survived. After the storm, it released 30 turtles and moved 30 others as well as many birds to another rehab group, the Texas Sealife Center on Padre Island, where the animals will temporarily be held until the ARK is back up and running. Donations are being accepted at both organizations: for the ARK and the Texas Sealife Center.

The Port Aransas Nature Preserve (Hotspot Near You No. 228), which we profiled in 2016, sustained significant damage, according to this Facebook post from the park’s management.

Organizers of the 29th annual HummerBird Celebration in Rockport/Fulton have cancelled the event, which was slated for September 14-17. “With the probability of no electricity or running water for the next 2-4 weeks, holding a successful event was deemed impossible,” the local chamber of commerce said. “Clean-up alone will take months at the least.”

Also, birders writing on the Oklahoma birding listserv reported on two additional post-storm problems. Jerry Davis noted that “hundreds of thousands of trees are likely to be lost due to storm surge of saltwater inland and flood waters on trees longer than trees can stand. This lose of habitat will not be replaced in our lifetime.” And Ron Huebner said he’s hearing that “hummingbirds are frantically searching for flowers along the Gulf Coast of Texas and finding none where Hurricane Harvey destroyed most flowers and flowering plants. I assume hummingbirds are more affected than insectivores as the havoc of Harvey might actually temporarily increase some insect populations and has exposed others that were previously unavailable in rotting trees, etc. The hummers need the energy to fatten up for the jump across the Gulf. I have heard from friends who can’t keep their feeders full due to the high drive-thru demand.”

If you’re aware of other news about the storm’s impact on the birding community, please leave a comment or send me an email. — Matt Mendenhall, Editor

Post updated at 5:45 pm CDT, August 30, with info about the Port Aransas preserve and comments from the Oklahoma listserv. (h/t to Laura Erickson)

Houston Chronicle: How to help victims of the storm

Sign up for our free e-newsletter to receive news, photos of birds, attracting and ID tips, descriptions of birding hotspots, and more delivered to your inbox every other week. Sign up now