Become a member and get exclusive access to articles, contests and more!
Start Your Free Trial
BirdWatching  •  News & Features  •  Conservation  •  Snowy Owls arrive amid new concerns for the global population

Just as a significant irruption of Snowy Owls takes place in the United States and southern Canada, the organizers of the international Red List of threats to wildlife reported that they uplisted the iconic large owl from Least Concern to Vulnerable.

A new summary of the species from the International Union for the Conservation of Nature reads:

“It is undergoing rapid population declines in North America and probably also in northern Europe and Russia. Drivers of the decline are uncertain but likely include climate change effecting prey availability, as well as collisions with vehicles and infrastructure. There remains some uncertainty about the overall rate of decline, and if it proves to be even higher the species may be eligible for further uplisting to Endangered.”

The global population size was previously estimated to number approximately 200,000 individuals, but the IUCN say recent estimates are much lower — around 14,000 pairs or even as low as 7,000-8,000 pairs.

“High rates of population decline have been reported in at least the American and Canadian part of its range, with Rosenberg et al. (2016) estimating a 64% decline in U.S.A. and Canada between 1970 and 2014; with an estimated population in these two countries of <30,000 individuals. Extrapolating backwards this would equate to a decline of c.58% over 3 generations (c.36 years) in the population in these countries.”

Read CNN’s summary of the most recent Red List update

Big flight around the Great Lakes

This winter’s irruption, so far, has been concentrated around the Great Lakes and on the New England coast. This past weekend, author and our “ID Tips” columnist Kenn Kaufman wrote on Facebook that “for the Great Lakes region, early indications are that this may be one of the biggest flights on record.”

Author and bird bander Scott Weidensaul, one of the coordinators of Project SNOWstorm, agrees that this year’s irruption is very large, but he isn’t sure if it will reach or exceed the overall magnitude of the 2013-14 irruption, which was the largest irruption in the Northeast and Great Lakes regions in perhaps a century. “The birds have definitely arrived earlier than they did in 2013,” he says, adding that it’s too soon “to judge the overall flight, since it’s clear there are still owls coming south. Based on what I’ve heard, this will be one of the best (if not the best) winter in the upper Midwest in recent memory.”

Just how many owls have moved south is anyone’s guess at this point. They move fairly consistently, so it’s easy to count the same bird twice.

“Two young females our collaborator Tom McDonald tagged along the southern shore of Lake Ontario flew 150-pus miles west into southern Ontario and the north shore of Lake Erie in less than a week,” says Weidensaul.

Ryan Brady of Bayfield County, Wisconsin, keeps tabs on owl reports in his state, and through December 6, he says, “Approximately 141 Snowy Owls have been reported across 55 of 72 Wisconsin counties. New reports are coming in at a moderate though not blistering pace.”

“The reason for the irruption seems pretty clear,” Weidensaul explains. “As in the summer of 2013, there was a major breeding event in northern Quebec’s Ungava Peninsula. That year, the lemming population in that region boomed, and Snowy Owls gathered there (from how far away, we can’t say) and nested in large numbers. More to the point, we know they had extremely large broods that year because Canadian scientists were on the ground there, checking productivity. Some nests that year had up to nine chicks.

“This year there was — right on schedule, since lemming cycles average four years — another lemming boom and another big Snowy Owl breeding event in the Ungava, as well as at least some Snowies nesting along the northwest side of Hudson Bay. What we don’t know, in the case of the Ungava, was how productive the nests were. The reports we had were from helicopter surveys for big game, and reports from large mining operations in the region, of many nesting owls, but there was no one on the ground this summer checking nest productivity. As we’d expect, the vast majority of the owls we’ve been able to age this winter have been young birds, and as is usually the case with this kind of irruption, most of them are in good health. The few that get picked up thin or starving are very much the exception.”

So far this winter Project SNOWstorm has tagged four new owls, two in New York and two in New Jersey. “We also have folks actively trapping in North Dakota, Michigan, Massachusetts, Maine, and the mid-Atlantic,” says Weidensaul. “We’re working with new partners to start tagging owls in the western Great Plains, and if necessary permits clear in time, we’ll be working in Ohio, southern Ontario, and a few other new places. We’re looking to tag 12-15 owls this winter, with a particular focus on tagging them quickly, so we can track their early-season movements before they settle down; tagging birds on adjacent territories so we can track interactions between them; and balancing our sample sizes of age and sex classes and habitat types.”

How birders can help

Birders can help in a couple of ways, says Weidensaul. “The most important thing is: Enjoy the experience! For a lot of birders, seeing a Snowy is a lifetime event. But it’s important to respect the owls; keep your distance and don’t disturb them, tempting as it is to try to get real close. All our tracking data confirms what scientists have long known — despite the assumption that they’re diurnal, Snowies are nocturnal birds at this time of the year, and getting bumped off their roosts again and again all day by birders and photographers isn’t what they want or need. If the bird is watching you, staring at you, fidgeting, and moving around, you’re likely too close.

“Photographers who get good, clear photos showing the spread wings and tail (*without* flushing the owl for the photo) can upload their geo-tagged photos to our website. After the last irruption we analyzed thousands of photos and mapped the age/sex class distribution across the irruption zone, and would like to do that again.” 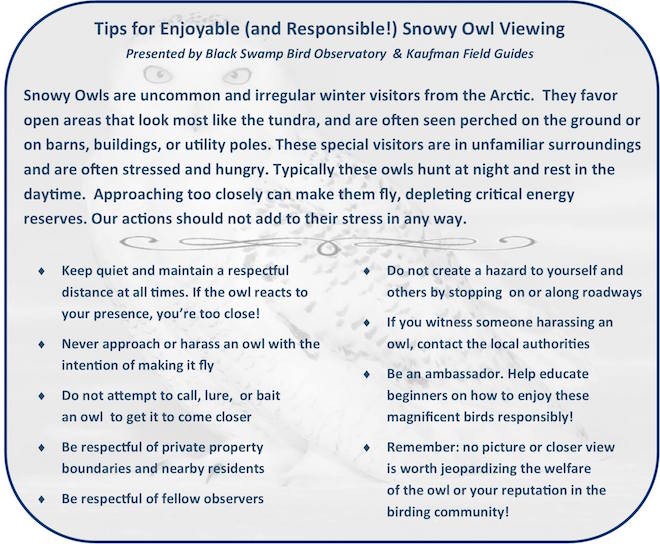 You can follow Project SNOWstorm at www.projectsnowstorm.org and on Facebook, and if you’re so moved, support the research with a tax-deductible donation. — Matt Mendenhall, Editor

How at least one Snowy Owl benefited from 2013 Razorbill irruption

Sign up for our free e-newsletter to receive news, photos of birds, attracting and ID tips, and more delivered to your inbox every other week. Sign up now