You might think, after more than a century of bird banding in North America, that we’d have a solid answer to the question of how long birds live. Instead, new so-called longevity records are established frequently. 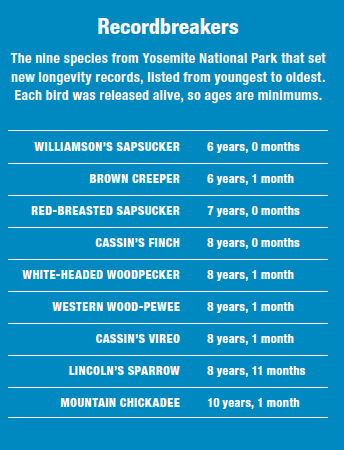 No fewer than 15 records were set in 2014, and another six were reported to the federal Bird Banding Laboratory in early 2015. It’s rare, however, for multiple new longevity records to come from one location. That’s what happened last fall, when banders at California’s Yosemite National Park reported nine birds that were old enough to set records for their species. (See the list at right.)

The park is home to five banding stations operated under the Monitoring Avian Productivity and Survivorship (MAPS) program, which standardizes mist-netting research of landbirds across North America. Yosemite’s stations are among the longest-running MAPS sites. (The park is also a great place to bird; we featured it as Hotspot Near You No. 214 in our August 2015 issue.)

A research team led by biologist Erin Rowan of the Institute for Bird Populations described the findings in the journal North American Bird Bander. “It is unclear whether the substantial number of new longevity records obtained from the Yosemite data reflects particularly high longevity at Yosemite, perhaps due to the relatively pristine condition of the habitat,” she writes, “or whether similar numbers of new maximum longevity records can be expected from other long-running MAPS stations across North America.”

A version of this article appeared in the August 2015 issue of BirdWatching magazine. Subscribe.